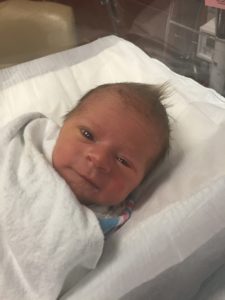 On Thursday, April 23, 2015, we found out we were expecting a baby. We were over the moon. We had fun with the typical thought process of wondering if it was a boy or girl, whose name choices would prevail, what their features would be etc. We just knew we were embarking on the best journey ever. On August 14, 2015 we walked into the women’s center for our anatomy scan. A scan we had been waiting for since day one. Hoping the baby was in good positioning to reveal their gender, it was all we talked about the way there, and while waiting to be called in.

The anatomy scan had revealed that not only were we expecting a baby girl, but one who was diagnosed with a congenital heart defect. Her defect is known as Transposition of the Great Arteries (TGA) with a Ventricular Septal Defect (VSD). We were then sent to Cohen Children’s Medical Center, where we’d be greeted by the top team in their field. I said from day one that from how we were treated with the utmost importance, that I felt like a Kennedy. Sadly the Kennedy’s are just as well known for their bad luck. We were brought in for a fetal echocardiogram, and after about an hour we would meet our daughter’s future cardiologist. She would then begin the process of unfortunately confirming our daughter’s condition, and explains what we would do from there. She was the first person to tell us that the baby is “safer” in than out and the pregnancy would require closer observation than most, and frequent visits with specialists and fetal echocardiograms for the remainder of the pregnancy. Now as frustrating as it actually is to lay under a hand probe with a belly covered in warm blue goop, it had its perks. Every time we had a scan, we would be blessed with a 3D image of our beautiful girl. No matter how many times we saw those pictures, it was incredible. Finally on December 22nd, we went in for our last echo before my due date, which was set for December 29th. We were told that the baby hadn’t grown since the week prior and she would need to come out; that she was now “safer” out than in. That was horrifying. Imagine being told for 20 weeks that with you, inside of your womb is where your child was the most protected, and now things have suddenly shifted. We were sent home and told to come back to be admitted at 10:00 pm. We went home, grabbed our bags, called our families, and smiled with every word we spoke to each other about how after all this preparation, we still didn’t feel ready yet. We headed back to the hospital where we were surrounded by family, waiting to be called in. At around 11:15 pm we finally made our way to our room, and began the induction process. It still hadn’t hit us yet I don’t believe. At about 3:00 am, I woke up to the worst pain. I was at four and a half centimeters dilated already and by about 8:30 am, I was at eight centimeters. The relief I felt when I saw my obstetrician enter my room is hard to explain. Besides my boyfriend and family, it was a sigh of relief to see a familiar face.

At 11:37 am I was told to begin pushing. Three sets of ten pushes back to back, then rest. At 11:51am, December 23, 2015, Wednesday morning, she was here. Lots of blonde hair and the most beautiful face I had ever laid eyes on. Considering her condition, the NICU team had been present in case of any immediate threat to her well being, and ready to jump into action. Now since her defect had been diagnosed, we were told repeatedly that holding her after birth would not be an option. That she may need supplemental oxygen among other possible medical attention. Amidst all of the chaos, a nurse turned to me and asked if I was ready for skin to skin. I was having trouble comprehending what she could possibly have meant, considering we were told it was so far out of the question. As soon as they placed her into my arms, I could tell that everything in the world had stopped. I could assure you that there’s no better joy than what that moment brought. Indescribable is the perfect word. After about three minutes, the NICU team had to bring her to their wing for immediate testing and observation. After about 4 hours, we were finally able to reunite with our daughter and she was better than anyone had predetermined. She was extraordinary. She surpassed every single expectation. Besides her umbilical line, she was not hooked up to any machine as we were expecting, and holding her was endless. It was the best Christmas present I could have asked for. On December 29th, she was ready for her surgery, the Arterial Switch Operation with the VSD closure. Her father and I accompanied her down to the operating room doors and after about 5 hours, we had been told that her surgery had gone wonderfully and that she was being closed up and brought up to the PICU, where she’d spend much of her recovery.

In the elevator on her way up to her recovery room, she experienced a phenomenon known as JET (Junctional Ectopic Tachycardia), which is an arrhythmia; an irregular beating of the heart, caused by abnormal conduction from or through the atrioventricular node (AV node). This particular phenomenon happens with cardiac surgery and goes away or “burns out” as we were told within the first 24-48 hours. As promised the JET was gone, a little less than 48 hours after it began, but unfortunately left behind an AKI (acute kidney injury) in its wake. With her soft tissue edema/third spacing, and a kidney injury, she wasn’t able to properly expel the fluids she needed to quick enough. After having to reopen her chest the following day to relieve pressure on the heart and allow it to relax and contract fully without implication, to her peritoneal dialysis to her catheter removal, everything was explained as a procedure that would send her in the right direction and get her “back on track.” On January 10th we were told that a great deal of fluid was being lost through her chest drain and that a procedure known as Thoracic Duct Ligation was looking like the next step to helping her recover. Assuming that a majority of her fluid loss included an important protein she needed that would assist in repairing the edema, we reluctantly agreed to the procedure, having not seen any great deal of improvement from any other necessary action. She was brought down to the operation room, once again with us in tow and feeling helpless as we kissed her goodbye, and wandered off into the family waiting room. Once again surrounded by friends and family, this waiting felt different from before. Whether that be due to the fact that we had hoped to be further along in the recovery process by now, or hoped to see drastic improvement after the past few days, we were growing tired of uncertainty. At about 2:28 pm on Tuesday, January 12, 2016, we were met by our surgeon, nurses and nurse manager returning from her operation. Being led into the Chapel, knowing how that could only mean one thing, we were told she had not made it.

After spending the first 7 days of her life, holding her, soaking up her scent, staring into her eyes, memorizing every tiny feature from her perfect Cupid’s bow lip, to her full head of dirty blonde hair, to her “bat-winged” ear, to her natural urge to put her hand against her face, (a trait she mastered throughout every sonogram in utero) to watching her sleep and feeding her, singing her songs, and reading her books. To family visits, excitedly waiting for when she could meet her older cousin, who also was diagnosed with a congenital heart defect known as Tetrology of Fallot shortly after birth, and wishing they could bond over their shared experiences as they grew older together, and to FaceTime with her older sister who couldn’t wait to meet her she often talked about how she’d help her with her hair and makeup and teach her all about Minecraft and YouTube tutorials. Sharing hand-me-downs and toys would’ve been a fun exchange to watch unfold. Holding her though was a beautiful thing. Maybe we appreciated it more considering we were told repeatedly how we’d have to wait until after surgery and recovery, but that blessing was bittersweet that we could only hold her only as far as her umbilical IV would allow, to then fast forward days later after surgery sitting idly by from two feet away watching as doctors and nurses would change your child. Replace dirty linens with new, holding her throughout the process, to a machine feeding her and breathing for her. Handing her over to surgeons to repair the wrongs Mother Nature had bestowed upon her. From a couch in a prenatal ICU surrounded by noises impossible to tune out, all you’re able to do is hold her hand and rub her forehead. Speak to her so that she knows you’re there. Luckily she was alert and more attentive than I am at most times. She always knew who to look at when they would speak over her crib. She would fidget if she felt uncomfortable. She had endured everything this world threw her way with more grace than I can handle the common cold. We will never forget the way she always managed to have a milk goatee, or how she would fall asleep as soon as you’d stroke her forehead. How she listened as you sang to her, or never minded who help her as long as she was swaddled. Or how much our lives had changed since meeting her. How with that first moment of looking at her, the world seemed completely different. Like your life had purpose. Going from wondering what color would be her favorite and if she’d like one stuffed animal more than another to, what medications made her feel this way, and which IV’s fed what. What time her X-rays came at night and counting fluid output from across the room. Being her advocates became our new purpose. Our divine animal instinct to protect our creation. That hasn’t stopped and her memory will serve as a reminder that amongst all the evil this world has to offer, there is utter purity too. She is our courage that we take with us everyday as we face our daily routines. She’s our ambition and she’s our strength and I hope that we can make her as proud as she made us. We hope her story serves as an inspirational one, and also as awareness that CHD’s are the most common birth defects in babies, affecting 1 in every 100 babies every year. That we may be lucky enough to prevent this tragedy from finding another family.

She is our baby girl, our angel and our sunshine.