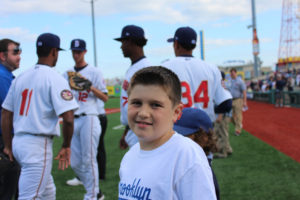 On June 12, 2004, Aidan was born. He seemed the picture of health at 9lbs. 4 0z. After not feeding well and going into respiratory distress, he was diagnosed with HLHS. He was transferred to Columbia where Dr. Quaegabeur performed the Norwood. Aidan did well and returned at five months for the bidirectional Glenn. We were on track for the Fontan at age three when we were made aware of a new procedure, the biventricular repair, being performed at Boston Children’s Hospital by Dr. Pedro Del Nido. We submitted Aidan’s records for review and were pleased to learn that he was a candidate. In June 2007 he had an OHS to take down the Glenn and shunt blood to the left ventricle. The left ventricle grew enough to be viable and in late September of 2008, we began a four month stay in Boston during which Aidan would have the biventricular repair, mitral valve plasty, and mitral valve replacement. Aidan recovered well and had several smooth years until he developed endocarditis in October of 2013, during which time he needed to have another mitral valve replacement. Aidan also had his aortic valve replaced in September of 2015. In addition to being a heart child, Aidan is a stroke survivor and has struggled with GI issues, with a recent diagnosis of SIBO.

Aidan’s medical issues, however, are only a part of who he is. He is also a very loved son and grandson, a brother to sister Emma, 13, brother Matthew, 7, and sister Lauren, 5. Aidan is a devoted sports fan who plays basketball and pitches for his baseball team. He is a great cook and a good student. We are very blessed to be surrounded by loving, supportive, family and friends, such as the crew at Gavin’s Got Heart!