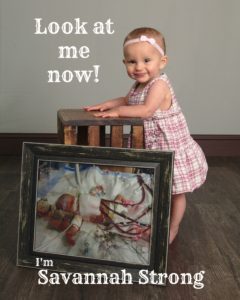 On Monday November 17th Savannah, at just 5 weeks old, went to the pediatrician for a cough, since we thought her older brother had shared his cold with his baby sister. Due to her labored breathing she was sent to Stony Brook Hospital. An x-ray was taken to check for possible pneumonia on Tuesday; however it also showed an enlarged heart. By Wednesday morning she had been transferred to New York-Presbyterian Morgan Stanley Children’s Hospital. It was her 6-week birthday. After a cardiac catheter was completed 8 am Friday morning, it was determined that Savannah has ALCAPA with a single left coronary. She was in open heart surgery by 2 pm. Within hours of Savannah returning from her surgery she arrested and was put on ECMO for 5 days. The surgeon didn’t know how she had survived with her heart the way it was; and we later found out that there have only been about 20 reported cases of ALCAPA with a single left coronary ever. We spent 25 days in the hospital, including Savannah’s first Thanksgiving; during which time Savannah developed a blood clot and a staph infection. Thankfully Savannah was able to spend her first Christmas home with her big brother Mikey. Although she came home on an NG-tube and heart monitor, both were off by the New Year. On Savannah’s hardest day in 2014 she had 20+ tubes, wires, and IVs, however she started 2015 with none – because she is “Savannah Strong!” Today, Savannah is doing great! Her heart function has returned to nearly normal and they are monitoring her for a leaking valve that she has developed. She is officially off all medication except asprint. Savanah continues to receive physical therapy and will be seeing a neurologist for an eye issue. She is about to walk any day! “Though she be but little, she is fierce” has become Savannah’s motto.